Tengu derives its name from a mythical Japanese creature known for getting into mischief. Our Tengu, however is more earthly in nature.  It responds to voice and sounds and takes on different facial features depending on the intensity of the sound. If no sound is heard for some time, it changes from a happy face to a sad face and then goes to sleep. Gently blowing on his face wakes him back up to his usual happy self. 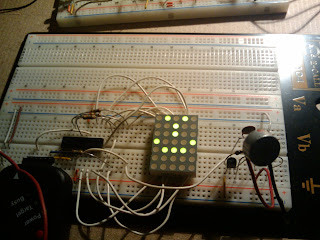 The Technical Details:
The project is based on a Microchip PIC 16F88 which is part of their mid range of microcontrollers. The sound is amplified through a pre-amp circuit based on 2N3904 and fed to the RB7/AN6 (pin 13) of the pic microcontroller. The A/D converter on the microcontroller is used to convert the analog signal from the pre-amp. The LED Matrix is directly driven by the pic. In order to be able to display the entire smiley, the LED dot matrix is multiplexed in such a way that only one row out of the seven is active at any given time. However the rows are turned on and off so rapidly, the human eye sees it as a full picture. This effect is called the persistence of vision. In order to achieve multiplexing, timer 0 on the pic is running at approximately 1 ms timeouts to switch the row that is being displayed on the LED Matrix. Timer 1 is configured as a general purpose timer used to keep track of the time since any noise over the threshold was heard. This is used to change the smiley from a happy to a sad one. The code is written in C using MPLAB and Hi-Tech C compiler ver 9.80. 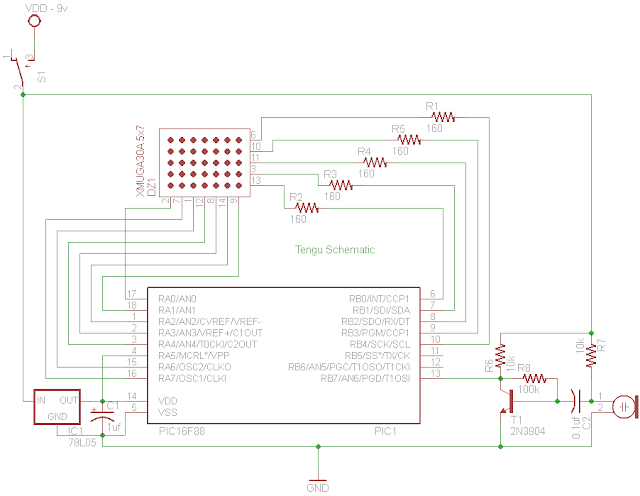 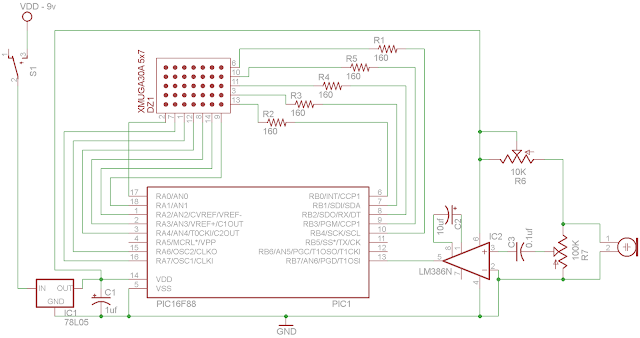 Designed by Mindfront Technologies for

The complete kit is available at www.chaneyelectroincs.com
Here is the video of the project in action: